skip to main | skip to sidebar

Written on Saturday: I'm still feeling a bit disoriented as I sit here writing this post. I find myself constantly checking the date to make sure it is still the same day I thought it was. Fortunately I did just get a few hours of sleep so I am not fully exhausted, but I certainly will not be up very late.

Two days ago, Friday I was up at my grandparents house and I had planned to meet with my cousin Tim and Craig, one of Tim's friends that I have come to be friends with as well. I was pretty excited. I have only seen Craig about three other times, and I don't see Tim that often either.

Craig and I had talked on a Myspace Bulletin and we had decided that it would be fun if we made a cake next time we got together. So, we told Tim our plan. Thursday night we had discussed possible cake options. Craig showed us the names of a few cakes and after looking at the ingredients for some we chose to make the 'Butterscotch Gâteau'. It did not seem like a complicated recipe apart from the fact that the "cookery" book we were using measured things in grams rather than cups. This made things a bit more difficult but rather more interesting I suppose, as we used Craigs balance by putting the appropriate amount of weight on one side and then adding the ingredient until they are level.

The cake was a three-part project. The first part was making the actual cake. There was nothing particularly difficult or odd about this part. The recipe was similar to most other cakes. The next part was making caramel. This was not very difficult but it was interesting. We just put water adn sugar in a pan and waited for it to boil and turn brown and then we would pour it onto a cool pan and it would solidify into caramel. This was a very slow process. While we waited for it to boil We mixed up the third part, the icing.

While we did that my sister Stephanie and my cousin Sarah decided that it would be funny to pop open the door between teh dining room and kitchen occasionally, and to ...i don't know?...eaves drop perhaps. We thought it was kind of funny. One of the times Stephanie popped opent he door and left just her shoes there as evidence that it was her so we put them in the freezer. She said that they felt good when she put them on later.

Once the caramel was boiling and the correct color we poured it into the pan and then concentrated more fully on the frosting. As it was, the frosting was a light brown color, but we thought...or at least I thought and they went along with it, that the frosting should be a color so we got out the food coloring and experimented. In the end Tim said that I used in 17 drops of red and 1 drop of blue in the icing...and then I put one drop of red on Craigs hand, (I had warned him about that one. hehehe sorta) and then I had the green dropper and I was trying to put i drop on his arm but he held my wrist away from him, so I just tilted the bottle over a bit and a drop of it came out onto the hand that was holding my wrist.

Pouring food coloring on Craig had to be one of the highlights of the night for me. He still has a green stain on his finger I think. By this time the cake was taken out of the oven and it was cooling so we went downstairs to have some fun while the cake was cooling because we couldnt ice the cake until it was cool. We had thought about doing a puzzle but when we got downstairs we decided that we would take advantage of the pool table and so we played two games. They were fun, though I lost both haha. I'm not a very skilled pool player, but I had fun.

After we finished the two games of pool we got out a puzzle and started to do it on top of the pool table. The puzzle was fun, it was interesting because the picture was a building with all these rooms, and it was a city council type building. There were nine floors in the building and each floor had about 5 rooms on each side, some were marked by numbers on the doors. It was very fun because you had to read the clues in the rooms to figure out where each room was, and then on the back of the puzzle, just in case you need a hint you can look on the back and see that it says "Congratulations" in many different fonts all over the back and if it doesnt say it correctly then your piece is in the wrong spot. After a bit we went up to frost the cake and to put the caramel pieces on it, this was fun.

After we finished decorating the cake we each tried it, and we were delighted that it actually tasted pretty good. 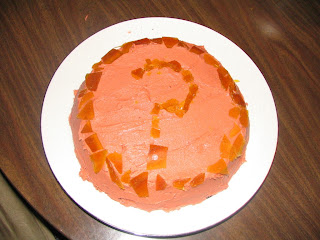 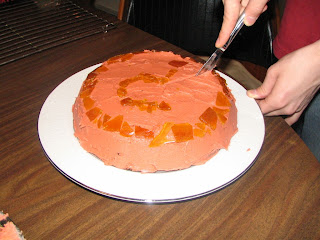 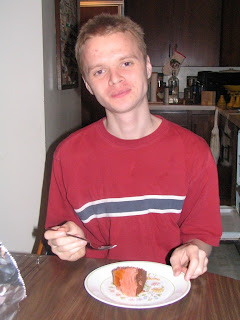 It was getting a little late by now but we hadn't finished our puzzle so we went back down and continued to work on it. We listened to the TV in the background but we didn't pay full attention to it because at that time of night there isn't really anything good on. At least not on the few channels that are recieved on the TV in my grandparents basement.

The puzzle was shaping up nicely, but I don't think that was our main force in keeping us amused and awake. Tim, Craig, and I all have Facebook accounts. Facebook has this option that you can "Poke" your friends online. And all that happens is that their home page says 'so-and-so poked you', and then you can either poke them back or stop the poking altogether.

Well we are all avid 'pokers' and so we poke each other everytime we are alone. And when we are sitting at computers next to each other we poke each other for real and on the computer. So the entire night we were poking each other and our 'poke wars' became very funny and more frequent as it became later and later in the morning.

After we had finished the puzzle: 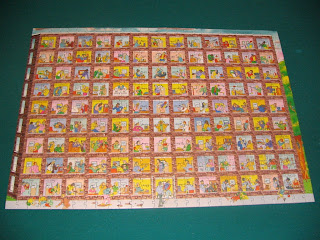 we went and watched TV, Tim was doing some stuff on the computer and Craig and I were watching the ridiculousness of some of the TV shows that are on that late at night, or early in the morning, however you look at it. At one point my grandma came down and asked us if we had gotten any sleep, we said no and she went back upstairs.

A bit later Tim went to sleep and then my grandpa and I took Craig home. Craig forgot is 'cookery' book and I'm not sure if he has gotten it back yet.

Overall it was a very fun night, and I hope that we can do it again some time, although I was very glad when I got some sleep which wasn't until we went home. But I did sleep the entire car ride.

Loving Everyone Always Forever
Posted by Laurel at 4:46 PM

I wish i had people like that to have fun with. :( but I don't have a cousin or a cousin's friend. :(

maybe one of these times you can take me up with you.

It is a very hard puzzle. As you can see, there is a border around 117 different "rooms." But what you probably can't see is that each of these "rooms" are made up of four pieces that are the exact same shape. So without looking at the back for the "Congratulations," it's entirely possible you could put a room in the wrong place without noticing it.

Which is why there are clues. First you see a room in which someone is panicking, saying something like, "There's a gorilla in the room next to the mayor!" But somewhere else in the building, someone's looking for the mayor's office, and the person in the next room points him to room 905W. Because there are only five rooms in each wing, the gorilla must be in 904W. But of course, you can't figure that out until you piece together the conversation taking place between the other rooms.

why do i always look funny in pictures?

maybe it's because i just look funny :-(

hmm...so last time i checked you were gonna post about christmas, but that was 2 weeks ago.

Things I want to Accomplish: